"It is claimed by many that Tiru-Valluvar was a Jain. I do not accept this theory"~ C. Rajagopalachari ~

Tamil which has an unbroken literary history of over two millennia (Sharma, 2000a), has produced many a literary gems. Undoubtedly the foremost among them is Thirukkuŗal (Sacred Couplets), attributed to Thiruvalluvar. Because of its poetical merit, ethical values and overwhelming popularity, the work continues to attract the attention of scholars to write commentaries and produce new translations in different languages. The catholicity of the work meant that it has not spared the attention of all scholars irrespective of their religious affiliations. Be it the government of Tamil Nadu or the Universities that deal with Tamil literature, the popular trend has always been to project the Kuŗal as a non-sectarian work of universal values.
Like all people of his time, Valluvar would have also been born into some religion, but he seem to have made a deliberate attempt not to force his religious ideas through his work. Though many religious groups, including Jains, Saivites, Vaishnavites, and sometimes even Buddhists and Christians have claimed the Kuŗal to be a reflection of their ideologies [Aiyangar, 1923; Kasthuri Raja, 2005; Shanmugampillai, 2005, * , * , *), the Kuŗal has invariably been considered by the majority Hindu community as a work bearing affiliation to their religion. Whenever questioned about the presence of some verses in Kuŗal that are either contradictory to Vedic practices or in support of other religious traditions, the common response has been to project Valluvar as an "unconventional" Hindu (see Subramanian and Rajalakshmi, 1984) or as one belonging to a lower caste under Brahmnical religion (Aiyangar, 1923).

There is a widespread belief amongst Jaina and many non-Jaina scholars that Valluvar must have been a Jain or a person inclined towards Jaina ideals. The Jains have made remarkable contribution to Tamil literature in the form of epics and ethical literatures (Chakravarti, 1944), and also to Tamil language and linguistics through written works on grammar, prosody and lexicography (Champakalakshmi, 1994). Though medieval Jaina scholars like the commentator Vāmana Munivar of Tamil work Neelakési  had regarded the Kuŗal as their scripture (Zvelebil, 1975; Subramanyam, 1987; Venugopala Pillai, undated) and many contemporary writers had deliberated over the issue of Valluvar being a Jain (Zvelebil, 1975; Gopalan, 1979; Subramanyam, 1987; Venkataramaiyah, 2001), it was Chakravarti (1953) who made the first significant contribution to this claim in his long introductory section of his complete translation of Tirukkuŗal. He not only provided a series of internal evidences from the Kuŗal to claim that the Kuŗal is a Jaina work, but also identified the author of the Kuŗal with the great Jaina Āchārya Sri Kundakunda or Elāchārya. Chakravarti's work was followed by Subramanyam's (1987) work "Tiruvalluvar and His Kuŗal" where the author, besides profusely quoting from Chakravarti's work, also produced his own series of both internal and external evidences to show that Valluvar was a Jain. Besides such works that address specifically the issue of Valluvar's Jaina background, many well known translators of Tirukkuŗal have also touched upon the claims of Kuŗal being a work of a Jaina. Reproduced below are some of the most popular remarks made by different scholars over a period spanning more than a century.

"The Jains especially consider him their own, and he has certainly used several of their technical terms, and seems to have been cognizant of the latest developments of that system"G.U. Pope, 1886
"There is no doubt that the author of Kuŗal fully accepted the Jaina teaching on ahimsā"
H.A. Popley, 1931
"The book Kuŗal is an exposition of the fundamental principles of Jainism"A. Chakravarti, 1953
"Descriptions of God found in chapter 'Praise of God' lead one to conclude that
Valluvar must have been a Jain"Prof. Vaiyapuri Pillai, 1956
"It is claimed by many that Tiru-Valluvar was a Jain. I do not accept this theory"C. Rajagopalachari, 1965
"According to my modest capacity of research and the establishment of truth,
Valluvar's work has as its basis the Dharma of Jainism"V. Kalyanasundaranar (cited by Kulandai Swamy, 2000)
"The ethics of Kuŗal are rather reflective of the Jaina moral code"K.V. Zvelebil, 1975
"Though the Kuŗal contains ideas cherished by the Jainas, it is not probably a Jaina work"S. Gopalan, 1979
"None of the positions that the poet advocates in his verses are inconsistent with Jaina practice"K.N. Subramanyam, 1987
"There are some indications in the Kuŗal of Valluvar having being a Jain"P.S. Sundaram, 1990
"One can see the touch of Jain philosophy in the aphorisms of Kuŗal"Shanker Dayal Sharma, 2000
"He most likely was a Jain ascetic of humble origin who worked as a weaver"Webster's Encyclopedia on Literature

Listed above is only a fraction of what has been said or written about the claims of Jaina background of Tiruvalluvar. Many writers in recent times have also supported the claims of TirukKuŗal being the work of a Jaina (see Venkataramaiyah, 2001; Jain, 2002b, Shanmugampillai, 2005). Also available are few comprehensive research works analyzing the claims of different religious groups. These works invariably project the Kuŗal as a work containing verses for and against all these religious sects, and therefore belonging to none. Notable amongst them are the works of Kamatchi Srinivasan (1979), Gopalan (1979) and K. Mohanraj (1983). Some of the major conclusions of Mohanraj are worth reproducing here:
We will see in the following sections of this long drawn out article, whether these conclusions are appropriate. With Valluvar's Jaina background being discussed in every major translation or scholarly publication, it is possible that there is some truth behind these claims. There is a proverb in Tamil that no smoke can emerge without some fire (நெருப்பு இல்லாமல் புகையாது). The objective of this article is to investigate into such claims and see (i) if the moral values taught by Valluvar in Kuŗal is based on Jaina dharma, (ii) if the deity praised by Valluvar in his first chapter could refer to Jaina Godhead, and (iii) if internal evidences are sufficient enough to show Valluvar as a Jaina.

The outcomes of this long drawn-out investigation has been presented here in the following sections:

There are few other works attributed to Tiruvalluvar. These include jnānavettiyān (ஞானவெட்டியான்), navarattina cintāmańi (நவரத்தின சிந்தாமணி), panjarattinam (பஞ்சரத்தினம்) and uppusāttiram (உப்புசாத்திரம்) (*). Surprisingly, none of these works even find a mention by writers whenever they introduce Valluvar and his work Tirukkuŗal to the readers; and not to forget that these works are never taken into consideration while attempting to show the religious affiliation of Valluvar.  The very obvious spurious claims of Valluvar's authorship to these works could be the reason for scholars to totally ignore these works.  The fact that most of these are Siddha literatures composed during the 16th and 17th centuries with plenty of words of Sanskrit origin in them accounts for their outright rejection as the works of Tiruvalluvar (*, *, *).  We are not taking these works into consideration here since our objective here is to reveal the religious affinity of Tirukkuŗal and through that show the religious inclination of the author. 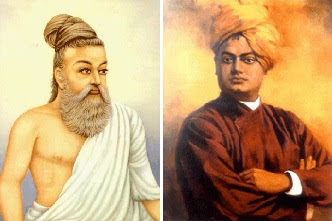